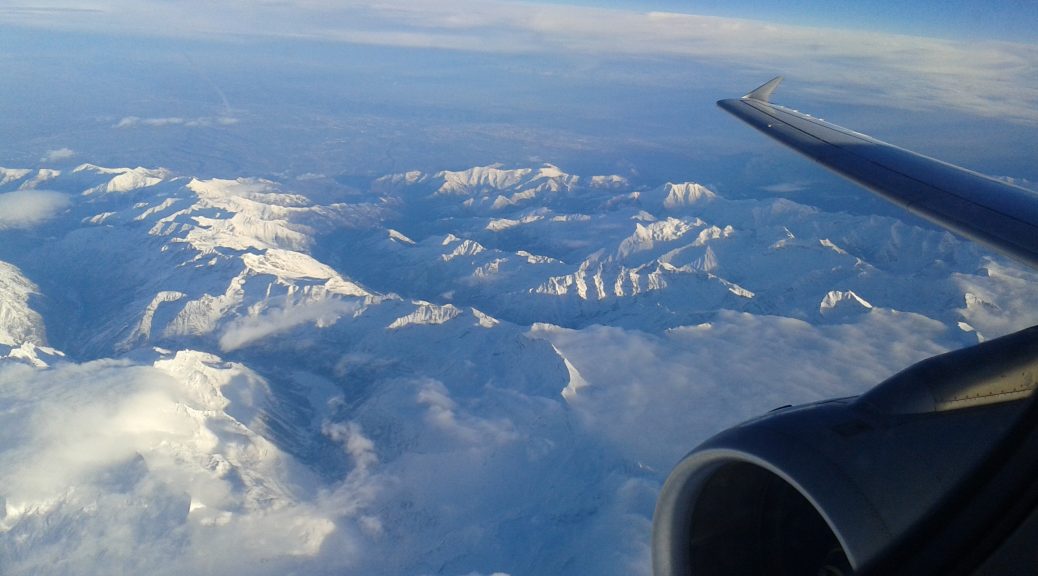 You are probably thinking: “So what? Everyone gets sick. What’s special about that? Why shouldn’t I fly when sick?” That’s what I will talk about today because I’m sick, drinking tea, sipping soup and  I’m not allowed to fly. As you may already know, I live in Barcelona, ​​but work from Frankfurt. That means I always have to fly to Frankfurt before my actual work starts. I was in a very good state of health already looking forward to my flight to China. Unfortunately, when approaching Frankfurt my left ear was completely closed, it felt like there were water bubbles inside and overall it just felt very uncomfortable. All evening long I could only hear partially with that ear. It was like wearing a pair of headphones or having an earplug in your ear. I hoped it would be gone the next day and I could fly to China. The next morning I was able to hear normal again and I only noticed a crackling noise. Nevertheless, I went to the doctor to make sure that everything was fine, because I did not want to fly sick. Were you allowed to fly?

Unfortunately, the doctor gave me a sick leave and of course I was not allowed to fly home too Barcelona either, ​​because in the worst case, that flight could burst the drum field. Instead of being ill only for a few days, it can happen that you will be sick even longer. Of course that’s not that exciting. Where do you sleep when you are not allowed to go home?

I have great friends in Frankfurt, Mainz and Wiesbaden, where I sometimes stay, whether healthy or even if I’m not allowed to fly sick. Same this time….I relax with a hot water bottle, sleep and drink a lot of tea. Have you had plans for your layover in Shanghai?

Yes, I often plan something or spontaneously do something. This time I signed up for a “3 colored Soup Dumplings” cooking class and made an appointment with a traveling companion from the Girls Love Travel Community. Unfortunately I had to cancel this now. Do you already know where you will fly to next?

Unfortunately I don’t! I have to go back to the doctor, who will hopefully give me the okay to fly again. Then I will contact the roster management department at work to report that I am fit to fly. They are responsible for our rosters and give you a new roster after you have reported that you are healthy again. Of course this is a bit risky in a month like December. It could happen depending on how long I am sick, that the entire roster changes and I therefore no longer have Christmas off. Therefore, many flight attendants fly despite a slight cold with the hope that it does not get worse. Unfortunately, it often happens that the illness gets worse and you are not able to work for a longer time than if you had called in sick for a few days until you are a 100% fit again.

Do you call in sick very often?

When I was still working in hotel management, I was definitely sick less often. Despite a cold I went to work anyway. Whether that was really smart, is another topic, but since I fly, I always call in sick even though it’s just a cold. My health is my priority, although my schedule and private plans change, I prefer to stay home. A small consolation is the view from my bed, when I’m not sleeping, because I can seeTibidabo in Barcelona. What is the difference in between an office job or one on a plane?

If you are working on the ground, you have a different working environment and a different physical impact. The dry air in the plane, the many people in a small area, the pressure equalization and flying in general have a big impact on the body, which a healthy body can deal with quite good. However, if you are slightly sick, your imune system weakend and you decide to still fly, the situation worsens due to all these effects. Before my time as a flight attendant, I flew with a cold because I was unaware of the effects. It also makes a difference if you work sick or just sleep in an airplane. As a flight attendant, we are physically active and push, for example, the heavy beverage and food trolleys, repair seats and much more. Of course, other jobs are exhausting when you’re sick, but in the air everything just feels a bit more intense. It is also not fair to colleagues if you are not 100% functional and may even drop out during the flight, as the workload for them will be higher. One should also not forget the security for which we as flight attendants are primarily responsible for. In case of an evacuation or emergency, you have to be 100% there and if you are ill, your functions are usually limited and mistakes may occur. What happens if you get sick during work or the layover?

Once, on the long haul flight back to Frankfurt, I fell ill with a gastrointestinal flu. I was no longer able to work. One time I also had to stay longer in the layover, because I got an ear infection and was not allowed to fly back. So you are in a foreign country, maybe there is no crew on site, you do not speak the language and you are sick. Most people would like to be at home and feel even worse. I think it’s not great, but I can handle it pretty well, since I only sleep and don’t notice anything in my surroundings. Of course, if you’re on the short-haul route, the flights are much shorter, so you can usually get back to Frankfurt depending on what you have. There you will leave the tour early. In this case, a standby (a replacement) is called, which intervenes for the sick person and works the remaining flights. Are there any specific doctors we see?

Yes. The airline I work for has contracts with a doctor in every city where we fly to. If we get sick during the layover, we will visit that doctor. Doctors must meet certain criteria, such as speaking English.

Think twice, if you want to fly when you are sick. Above all, you should never mess with the ears. If you have problems with pressure equalization, ask a doctor if it’s okay to fly. For example: If the drum field really bursts one time and does not grow back together, I can’t continue working as a flight attendant. Of course I want to avoid that.
Even after surgery, having fever or even severe sunburn you should be careful. We once did not take a family on the plane as we were advised by the airport clinic. The passenger’s sunburn was just too severe. Do you have any questions or have you ever been unable to fly due to illness? Then leave me a comment.

I would be happy to hear from you and above all, stay healthy!

One thought on “Flying sick – Yes or no? A flight attendant reveals”